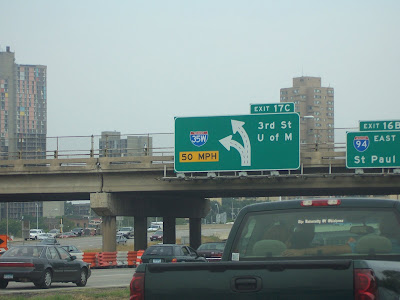 I took this picture while stopped on 94 going East. This is the exit off of 94 going to 35W and then eventually over the bridge.

Too unsettling. I had a meeting over in Minneapolis last Monday. I found myself holding my breath as I drove over any bridge. I had the music loud and the windows open. I know people that took that route home every day at that time. We actually know (far removed) one of the people who lost their life on the bridge that day. We got the call Thursday Morning. It was just so odd to see his face on the news. Rick has played man sports with him on several occasions. I have not been back since. I have traveled over many bridges since. I have been stuck in icky traffic due to re routing. Thanks to all of you who emailed and called.
Being so close is kind of unsettling. K~
Posted by K~ at 4:30 PM

A woman from our new church had a sister on the bridge. We were praying for her last night--she is still hospitalized and has had several major surgeries. Thank God she is alive!

It is just such a scary thing. K~