So last night was much of the same. I am still thrilled to be among these awesome creatures. We had a juvenile Trumpeter Swan there last night. So very large and cute. Hissing away at me. I was kind of laughing, because as the "little" guy was trying to be so scary, he had a leaf stuck to his bill. Kind of made the threats no so intimidating. 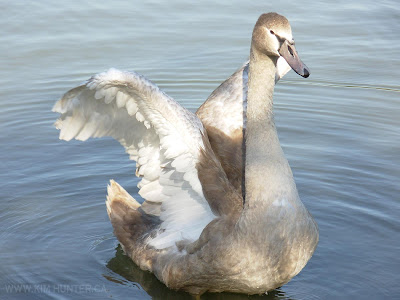 Had to clean my snapping turtle friends. One that has had some terrible head trauma is still there. It was so exciting, however, to see him lift his head. It has been the first time I have ever seen him do that. His head just flopped when I picked him up before. So he is recovering nicely. Yeah. The other feisty fellow that always wants to get out and eat me, was there. He fell over and showed me his belly last night. It was way paler then this guys. He looked like a plucked chicken. He struggled to turn over, until I helped him out. I think it was a ploy to chew my hand off. He didn't though. I have 2 still. 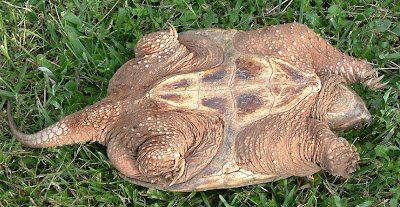 Still, I have to be grateful that we do not have alligator snappers up in this neck of the woods. Here are 2 photos of these babies!! I just don't think I would be too thrilled to clean their cages. I can't believe I am grateful to take care of our 20-30 pounders at WRC. K~ 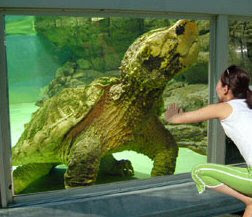