Quail in a dress

Quailly likes his dress.  He was losing feathers on his lower region possibly from having a good time with his stuffed alien girlfriend.  You know, too much lovin....

He often would end up pushing his girlfriend for some reason under a hanging fish, which is a cat toy.  Ever since I have removed his girlfriend, I believe he thinks the fish ate his girlfriend.  He is so terribly mean to this hanging fish. He has successfully ripped it open and torn out some stuffing.

So onto the dress story...

So while I was concentrating on his lower half I soon noticed his chest was balding as well.  So I crocheted him a sweater, which he wore very unhappily for approximately 2 to 3 minutes.  I cut the neck part down and that made no difference.  I cut it looser, and still he had a tantrum.  SO..... I cut it off all together.


What to do?  I was digging through some very old barbie clothes I was either going to pass onto nieces and nephews or donate and came across the perfect smock.  The smock must have been for a doll that was NOT a barbie because it was the perfect size for Quailly.  I put it on him.  Of course fighting the whole time.  I loosely tied it around his neck and made sure his wings were free.  HE WHEN BONKERS!!! So yet again I took that off and I was a bit frustrated so I just said here ya go, have the dress.  I have to start all over on  my quest for a dress.

Shortly after i tossed the dress in his habitat he started picking at the dress and before I knew it he had put the dress on up side down.  So now it was on him like the cone of shame.  JUST LIKE THE CONE OF SHAME!  He started to prance around his habitat using fast feet with his dress on over his head.  He could see fine.  He hopped up on his poop deck on his pirate ship and looked at himself in the mirror. He hopped up and down and up and down. He does this at leas 15+ times a day, and I may be underestimating.

So now he is a bald quail that wares an upside down dress.  k~ 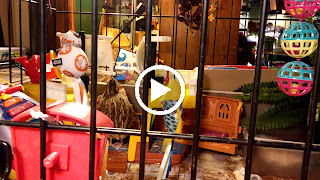