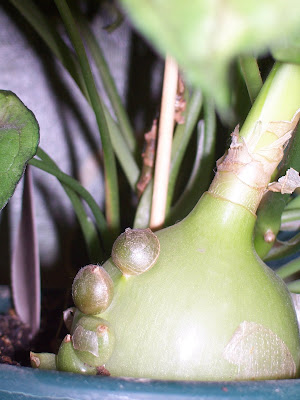 Since it has been raining since I don't remember, I have been trying to photograph some of my more unusual plants that are indoors. This is a plant called a Pregnant Onion. I was given one of the babies (as you can see on the mama) from a neighbor of my sister - in - law when I went to New York. Ok that was a looong sentence. Anyway.... that was in June 2004. I planted the baby. Nothing. One year later, I found it while replanting other plants. I thought, what the heck, and replanted it. Vwala!! It started to grow. I started to look just like an onion. Then babies appeared just like the one I planted. Now that's cool. So here it is. I am going to soon plant another baby and see how it goes.
K~
Posted by K~ at 7:57 AM