C's all dazed and confused

Monday night, I was watching "The Song Remains the Same". Led Zeppelins Concert movie. C was getting ready for bed and I asked her to come and see my favorite band on TV.
She came in and I think from the start she was very confused. She had kind of a "what do I say about this" look.
Then Robert Plant has a part in the movie where he comes to a shore, gets a sword from a woman, run and walks around looking very sexy, and eventually rescues a princess.
C- didn't know what to think. Mid way through the song, She said "I thought movies were suppose to have a point." My response was "Oh honey, there is a point. He is walking around and riding around looking good and then eventually rescues a princess."
No comment.
After the song, she said she needed to go to bed (a big first at my house).
Once she went into bed, I told her that there was a 20 minute song on now, did she want to come watch it?
She said "really? Do I have to?" I smiled and said of course not,I'm just kidding honey.
Not much of a Led Zeppelin fan, I guess. 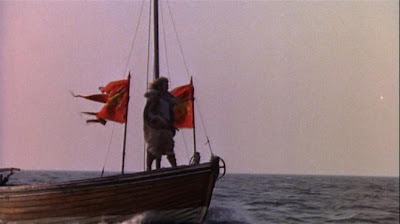 Robert Plant looking sexy on a ship and then a horse. Does there need to be more to a movie :-)??