The story I am about to tell is true.
It is still hard to believe for me, but since I lived it, I guess I have to believe it.

On Friday night, I cleaned the Zoo. I scrubbed things down as usual. I desperately needed to rearrange things to "open it up" over in that little corner. So, I switched the 2 water turtle tanks around and set them all back up again. (still a bit soar from all that work) ANYWAY. I got them all back in order and filled with water etc. Checked on everyone and proceeded with my evening. My bedtime routine is to feed the water animals, Puff and Pebbles, so I did that and checked on everyone, then, lights out.

The next morning, I was so proud of my arrangement and the clean tanks. I as starting to photograph them. It was around 9:45 am. I noticed that Peanut was missing. Being only 2 1/2" she can be hard to find sometimes. After a frantic visual search, I feared the worse. I started moving around some of the rocks. There she was.

I took her limp lifeless body over to the counter and placed her on a paper towel. If you have ever carried a dead animal, you know the feeling of lifelessness. Her little head and 4 little limbs hung like wet rags out of her shell. She appeared dead in every way. I looked for life. No breathing, eyes closed, limp. I compressed her shell a few times. I touched her eyes to see if they flinched. I quickly searched for an object to pry her little jaws open. Something told me to try. I got her eyes open an breathed a steady small stream of air into her mouth. NO NOT LIP To BEAK, towards her face. I touched her closed eyes, no response.

The kids were next to me by this time. Urging me on. I kept calmly reminding them that she is gone and we need to say good bye, but I will still try for a while. About 5 minutes later, I saw a weird jerk that I didn't cause. I wondered if it was just stimulated nerve endings, I told the kids I would try for a bit longer, shell compression's, breathing and stimulating her skin with a sterol needle. Again about 5 minutes later there was a jerk.

At about 10 am, I saw eye movement. She flexed some of her upper legs. Now I was in a quandary. Did I just arouse her brain enough to keep the poor thing in a weird live dead state? Kind of eerie. I decided then that if she kept responding, I would keep working. Soon she gasped. Then twitched some more. I continued giving her air, compression's and stimulation.

At about 10:30 AM, 45 minutes of continual turtle rescue. She had her eyes open and gasped regularly. I was moved. I could not believe my eyes.

I put her shell under cool running water, careful not to get her head wet. She responded even more. She was holding her own head up for moments at a time. Her front legs were moving . Her back legs were not yet. I laid her gently on a paper towel to rest and repeated this for approximately another 1/2 hour. 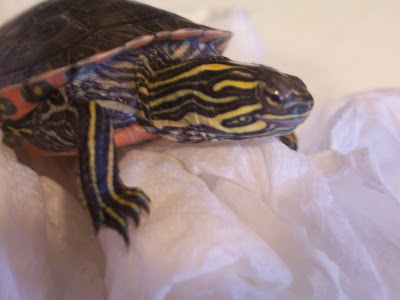 By 11 AM, I had propped her on a wet paper towel mound in a shallow bowl with about 1/4" of water in it to keep her moist. I put her under a heat lamp. Then the wait began. She mostly rested her body on the paper towel and then lifted her head and gasped really big. This went on for about 2 hours. She did not attempt to move. I was worried that she couldn't. There appeared to me no movement in her lower legs. At this time, I decided that I would need to bring her to the animal hospital to euthanize her if she kept this up for much longer. 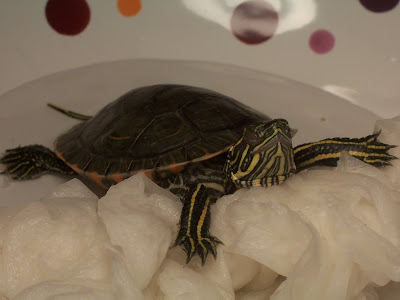 By 2 PM she was moving around! She needed to be switched into a container that she could not get out of. I was afraid she was going to forget to get her head out of the water. I kept if very shallow. I didn't know how much brain damage she would have.

I was so exhausted. By 3 PM I needed to lay down. I brought her container and light in with me (yes next to my pillow - in bed) and set a timer for 15 minutes. Of course I could not sleep. 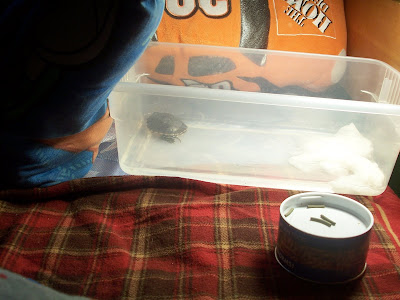 By 6 PM I had set up another tank in my office for her to be observed. She kept hanging out in the bubbles of the filter and it made me nervous so I moved her back to her small container.

By 10 PM she seemed "normal", stable and content. 12 hours later, she seemed that she would make it. 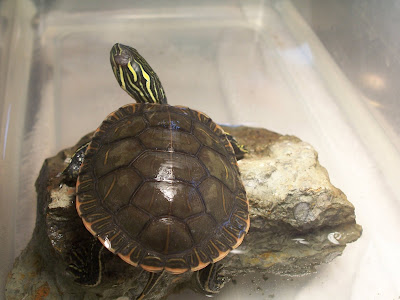 At Midnight, she ate a small earthworm. :-) We brought her up to our room with her light for the night. I checked her every 2 hours. She was just fine. But like a newborn, I kept having to awake her to reassure me she was just sleeping and hadn't passed. By the morning she seemed just fine. 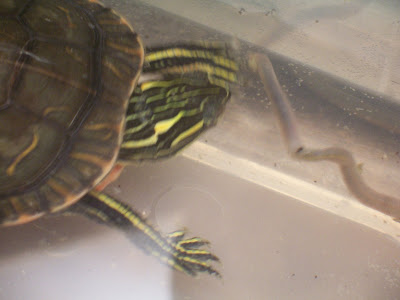 Almost 48 hours later, I am happy to report that she is doing all normal turtle things. 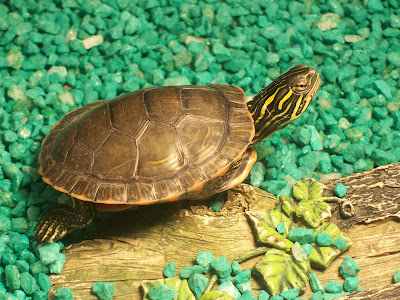 Wow! You are a great mom!

Did you know that Peanut was the Monkey's nickname when he was born?

I'm sure glad your Peanut is fine!

you know, i am amazed at the wonder of this story. i think of course that God was helping you to help Peanut. because He knows how much your turtles mean to you :)

i'm not sure it would even have occurred to me to try and revive! but the fact that you did it NOT STOP for that long is amazing. i am SO HAPPY that she is okay! after the sadness of losing the other clan, this makes me feel good. really good :)

you are the mom of the year. i bet the kids think you are magical.

Hi Marc, Thanks for responding. She's still doing fine. Amazing! I hope you and Kelly are doing well. It must have been odd getting back into the routine of "normal" life. Miss the Blog!! K~

hello ma'am. Just wondering, before you revived her, did she have shut eyes? And very stiff arms? Or was she limp and her eyes were only shut? Also, how did you pry her eyes open. Thank you!