It was time to get the zoo outside. Monday was just beautiful. So instead of a nap, I got the outdoor grounds of the zoo prepared. The land turtles are in the screen covered box. Shelley, Yuri and Pebbles spent their time pooping and walking through their water. Shelley and Yuri kept busy scaling the walls like spider man. Yes..... like spider man. They would hang from the side for a while and then flop on their backs. Which gave them some thing to do for a while, as they tried to right themselves. 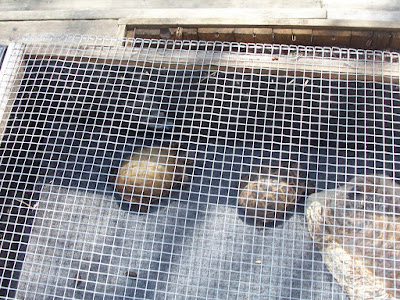 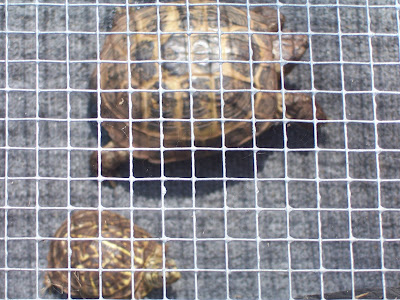 The water turtles were out in full force ( I did however, forget LuLu inside..oops)
They swam around and around and around. The 3 large turtles drove me out of my mind scratching on the side. It was not a relaxing sound. At one point Cleo had Magellan's foot in her mouth (they don't usually share a tank together) so, after yanking that out and redirecting her, I realized I needed to supervise them even closer. My second tank is not set up yet, for them so they will get only limited time out. Later that day, I only brought out the 4 little ones and left the 3 large one inside. I need to also get an edging up for their tank. They too like to escape. 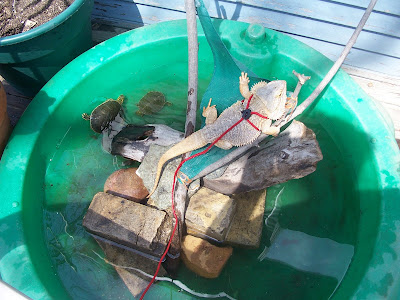 Then there was sweet little Puff! He just doesn't seem to like the outdoors. He tried to sit on his stick. He then proceeded to fall in the water! It's OK, they actually should soak quite often, but, he is not too keen on it. Then he fell in again, and seemed to have a fit. So.... I had to pick him up. He pooped all over me for the very first time. He has NEVER pooped outside of his habitat. He has been super clean. But, there I sat. Bing on my lap and Puff on my shirt. I was totally covered in Lizard poo! I sat there for a while trying to enjoy the sun. Nope, not going to happen. I needed to dump Bing, put Puff down, and go wash up. I proceeded to wrap Puff in his favorite Vikings blanket and there he sat on my lap. In his mind, as he should be. Wrapped in a blanky on my lap. I will try and give up making him a wild animal. He's just a "baby". 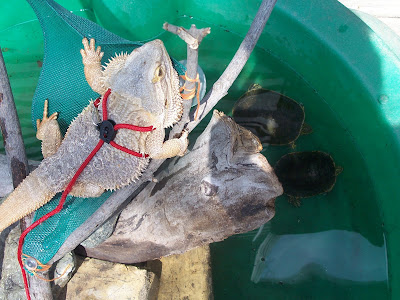 Then of course it wouldn't be a "relaxing" time with out Bingy. He is just such a curious dog. I don't think you can see the hair cut I had to give him after he got into burrs. I call it Mange chic or Chemo cut. He won't sit still and bites the scissors so terribly, that I just can't do it for too long. So that's what you get. S decided to color red marker on his back. Bing just needed to be involved with the animals and loved "watching over" the land turtles. 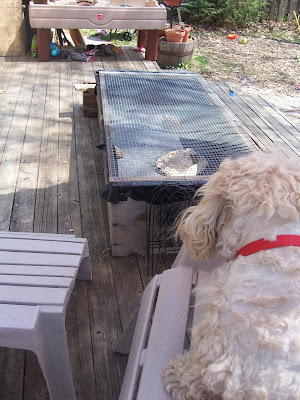 Nala, who is not in the photo was off rubbing in the dirt. Teasing Bing the whole time. The fish are still inside, until I can finish the tanks outside. Just another relaxing and calm day at the Walsh home. Moments later, I found myself in D's bed napping a usually. But, at least I tried to be "active" it just wore me out!!

wowza! that is a sweet little zoo!

is that a reptile "hammock" you have constructed for Puff?!

love that you are back bloggin' bigtime!

Yes that is supposed to be a lizard hammock. He has not liked it from day 1. He prefers his blanket. K~

Hi Kirsten,
Hope this doesn't step on your exposed underbelly of vulnerability but nice grooming on Bing!

Hey Lisa!! I miss you! I am not offended. That is an amazingly aweful hair cut. Now he is covered in orange pop! K~