It is a reality. There I am with my bun and all, crafting and learning YEAH!! Should have been given a bit more credit in the article... but... it's certainly NOT about me as an individual. I am so so happy and proud that all our hard work (5 of us) stuck with it. I saw something come full circle. That doesn't happen all the time. K~
Parents pepped-up about PEP 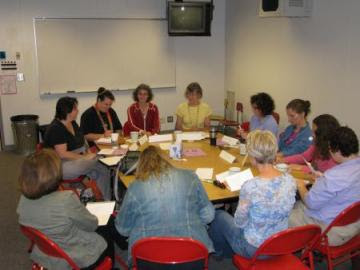 PEP group meeting in September. Photo by Deb Pleasants.
By Deb Pleasants , TC Daily Planet
September 20, 2008
“It’s about time they have a parenting class for parents with school-age kids,” Melissa Semrad said. PEP, the new Parent Educational Program for parents with school-age children, debuted in September. Created by the Working Family Resource Center in Saint Paul, PEP addresses the concerns of parents with children ages 5-12 years of age.
When Semrad’s son was an infant, she participated in parenting classes sponsored by ECFE (Early Childhood Family Education). ECFE is a widely popular parent education program for families with children under five. She felt the parenting advice and peer support she received in this program was invaluable. Semrad remained in the program until her son headed off to kindergarten. She had no choice but to leave; she had aged-out of the program. Semrad found herself facing this new stage of parenting and nowhere to turn for help.
To register for the next PEP session, contact the Working Family Resource Center at 651-293-5330.“All of our problems don’t end when our kids start school…sometimes they’re just beginning. Parenting gets harder the older they [the kids] are and you have less and less influence,” Semrad said.
Semrad is not alone. Many parents rely on ECFE. They see it as a lifeline between parents of small children and parent educators knowledgeable about the many issues involving childhood development. Severing that line just when parents need help navigating complex issues such as peer pressure, self-esteem, and sexual development did not make sense.
“I actually have felt a drift in some common, but extremely difficult topics. I just could not give up the idea of getting easily accessed help out there for the common everyday issues that come up for parents and their children,” said Kirsten Walsh, mother of three.
Walsh was one of several former ECFE parents who decided enough was enough. She and several other parents including Julie Printz realized if they wanted a parenting group designed for them, they needed to convince potential funders it was a worthwhile venture.
“We interviewed other parents and found there was a desire for it…Many parents grieved once they left ECFE and had nothing to replace it,” Printz said.
Their survey yielded the results they needed to find an agency willing to tackle this issue. Printz reached out to the Working Family Resource Center, which already had a PEP program they used for working families.
“I was thrilled that the WFRC was able to line something up. They were a natural since they already had established connections with parent educators,” Printz said
Working Family Resource Center began in 1985 funded by Saint Paul Public Schools (SPPS). Its purpose is to provide parenting education and other resources to working families. WFRC offers a wide-range of services including community classes, online seminars and library resources. However, WFRC is perhaps best known for the brown bag parenting seminars they hold onsite for employees at over 100 area businesses.
“There is not another organization like ours…we are unique,” said Beth Quist, Director of Education at WFRC.
On July 1, 2007, WFRC broke away from SPPS and became an independent, non-profit organization; this decision granted them more freedom and flexibility. Even with a small staff—two fulltime and three part-time employees—last year WFRC provided services to over 10,000 working parents throughout Minnesota as well as 15 other states.
“It [WFRC] can now reach beyond Saint Paul boundaries. We can reach a broader audience with technology and web seminars,” said Quist.
Typically, employers contract with WFRC to provide services to their employees. In this case, however, SPPS Community Education offered space at the Rondo Center. It seemed like an appropriate partnership since many of the parents participating have children attending school in Saint Paul.
Similar to ECFE, Working Family Resource Center uses licensed parent educators to facilitate classes. However, there are distinct differences. One difference is in funding; ECFE is a state-funded program. WFRC, on the other hand, receives its funding from employers. The new PEP program receives funds from SPPS Community Education \ and participant fees.
Another noticeable difference: WFRC has no age cutoff. Their services cover family issues at all stages of growth. In fact, a four-stage PEP program already existed: birth to 5 year, 6 to 12 years, Adolescents and Eldercare. Because resources and parent educators were readily available, adding the new PEP class was rather easy.
At present, WFRC plans to hold two classes. A morning class started earlier this month with twelve participants. They plan to start an evening class for working parents as soon as enough parents register.
Parents will meet weekly for eight weeks. Rather than strictly adhering to a set curriculum, many of the topics discussed will be parent driven. The parent educator will customize the course to reflect the concerns of the participants.
“No two programs will look the same,” said Quist.
Quist hopes WFRC will be able to expand the program in the future. However, first they need to evaluate the success of this first session.
“We want to do an initial program…do it extremely well and then make decisions based on that,” said Quist.
Deb Pleasants worked as a probation officer for 15 years prior to becoming a stay-at-home-mom. In addition to caring for her son, she is a freelance writer and citizen journalist. She resides in St. Paul with her family.
Article Tags:
St. Paul,
Community Culture,
Education
Posted by K~ at 8:24 AM

Thanks you too. I do kind of sound like a big person, don't I?? It took 3 years commitment to make it work. Phew. K~

well, it's just neat to be part of something that is bigger than yourself.

i'm proud of you, dear, you are turning into a pretty cool grown up :)

Thank you so much Bob. I feel a bit overwhelmed sometimes, but sometimes it works out :-) Now, I need to get Montessori Connections up and running for the year and I have done 2 civic duties for 2008. K~