Oh Perdi.  He is such a trooper.  He came to me gravely ill at 11 weeks.  A vet at a rescue center in St. Cloud knew a vet at WRC.  She looked over Perdi and asked me if I was willing to try and nurse him back to health.  Of course, I couldn't leave him so sick.  He had critical metabolic bone disease in his jaw and from his lower spine down.  He was practically paralyzed in both legs and had a dramatic hump in his lower spine.  I needed to syringe feed him critical care mix and baby food for weeks.  I also had to do extensive physical therapy on his spine, tail and legs.  It was important that his spine was flattened some so that he was able to go to the bathroom.  So everyday I would work his legs and tail.  Through the years he had a couple of check ups at the exotic vet clinic.  His front 1/2 of his body was deemed completely healthy, but his hemi-penis would fall out all the time.  So I needed to put up a visual barrier between Francis and him so he would not get excited.  I work in tandem with the vet at the clinic to keep his hemi-penis in and so far he has not needed surgery.  He is an Orange morph which is a beautiful morph of the inland bearded dragon of Australia.  They are usually very expensive.  How sick this little guy was in only 11 weeks.  His tail bitten off or torn off in some way near death.  So sad.  But this little fella is now 6 years old and doing fine.  He holds his own when Francis gets near and even got a crunch of his leg once :)  k~ 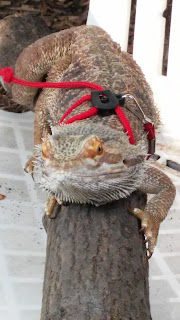 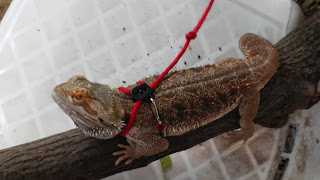 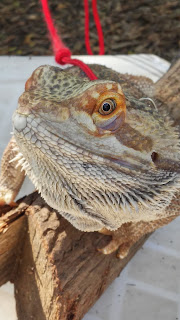 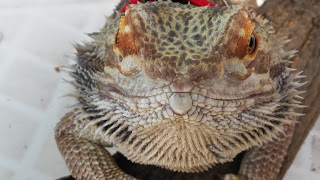 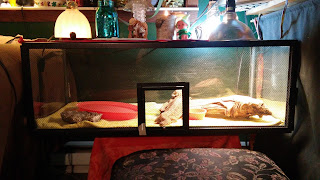 I love this its so cute! especially the cat and there is so many animals Ugh Snakes medusa is extra scary Just saying Its soo cool