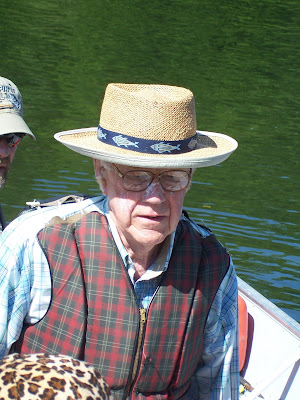 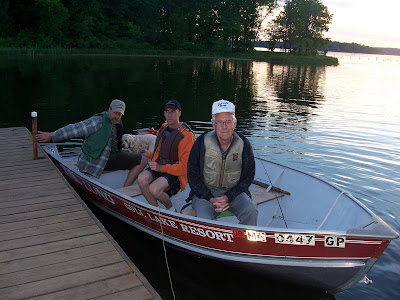 No trips to the Brainerd Hospital this year. That would be a first out of 4 years. I had a good time. The best time I could have with my truly sweet and highly needy father in law. I love him so much. He is one of a kind.
Highlights with Tom:
Him frying bacon. This played out like this...Me finding the bacon, the pan, the fork, the plate, the paper towels for the plate. Laying out everything with in reach of the stove. Putting the pan on the stove. Opening the bacon and pulling it out of the wrapper so it is easy to get. I laid back down thinking that there was not much left to do. I woke up to my sister in law pulling the fire alarm off the wall and putting it outside. Thank God she was over there. I came out and found the raw bacon touching the cooked bacon 2 times. But worst of all, He left frying bacon on the stove while he slowly made his way to the next door cabin to deliver bacon to them. Not once, but TWICE. Oh dear. I explained to him that was very dangerous and he said " not even for a minute?" We lived.
Then there was the unsteady walking over uneven ground. Waiting for him to come tumbling down.
Listening to stories at dinner that consisted of copious amounts of ear wax being removed from his ear and other details of his visits to the doctor. 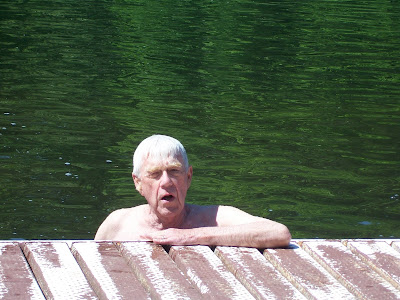 Suffering from cataracts, he greeted me one morning with "Morning Rick" and could not find the butter in the butter door in the fridge, or pretty much everything else. I had to wave him off of the dog food for cereal and had to suppress my laughter when he riped off the fake cabinet below the sink, looking for the spoons.
Then there was the usual looks from the kids as they try to talk to him as he walks away because he can't hear very well. C's are wonderful. S has to be reminded he can't hear. 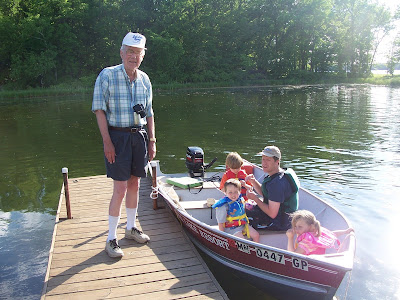 When he went boating, he got out of the boat by laying on the dock. It was kind of sad.
Appling sun screen is a long and enjoyable event. He puts it on so you can still see it there. Then, and hour later, he reapplies. You have to see it.
He has a wonderful sense of humor. I do really enjoy his company.
Well that is enough for today. There are many many more stories, but his topped the charts for me.
K~
Posted by K~ at 9:59 AM

i hope hope hope when i am Tom's age that i am taking a dip in the lake, and attempting to fry bacon :)

Thanks much Bob. Isn't he great! He is quite a one of a kind type of guy. Truly the last of another generation. K~