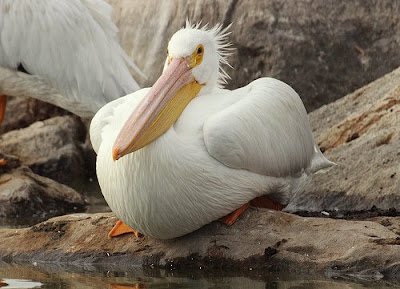 I am so in love with my new co worker. He/she is ADORABLE!! I am in ward J. I need to clean the 4 snapping turtles, 5 ducks outside, one herring seagull, one angry little duck and this sweetheart juvenile American White Pelican. So I am busy cleaning out the turtle bins, and dead fish are spilling onto the floor heading for the drain. I hear an odd noise of some major rustling behind me. There, up on his 2 foot high pen sits an enormous baby pelican. His wing span is about 5 feet and it is attempting to fly. It jumps off the pen, and walks over to where the dead fish are. He proceeds to work on eating these tiny minnows. He picks at the grapes and apple pieces too. Then unexpectedly, he come over right next to me and starts to check out the snappers. Needless to say, I moved him along. He followed me around for the remainder of the evening. When I went out side, I needed to prop the door open. I needed to keep an eye on the door, because he was determined to come and help me out there. When I got to cleaning the angry duck, he was so close to me that his soft bill was just rubbing on my leg and his feathers were brushing up against me. At one point he was kind of pushing me aside and was sticking his huge bill in the duck enclosure. I had to physically move his bill out of the duck pen. He was persistent. Finally his fish was thawed and his pool was clean and after he stole most of the herring seagulls fish, he got out of the seagulls pen and flopped into his pool as I threw him fish like a seal. 3 to 4 - 5" fish at a time. Oh he was SO happy!! Just such a special special time for me. Heart warming really. If he wasn't 3' tall and about 20 pounds, I would have wanted to just tuck him in my pocket and brought him home!! He did poop everywhere too, but so does Bing! 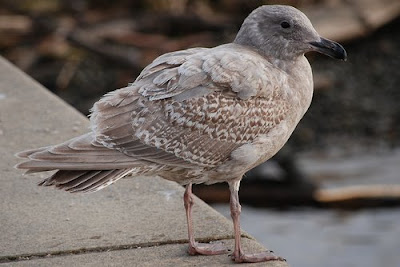 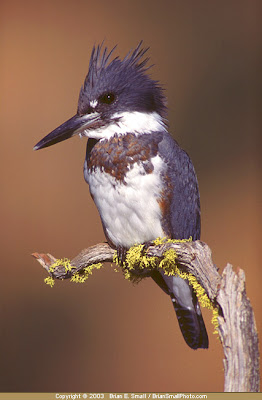 Belted Kingfisher - I snuck in and peeked on this cool bird. Didn't have to care for it, but still super neat!
K~
Posted by K~ at 8:48 AM

i love how much you love your job. and man, i cannot help but think it is really what you were born to do ;)

Take her home! I bet you could litter-box train her, and she so clearly wants you to be her mama!

That's an idea Karen. Litter box train....hhmmm. I am a bit concerned with her 6'-9' wing span as she grows older. Then there is the pounds and pounds of dead fish she would eat. but.... I have cared for more difficult animals/people. K~

ahem. emphasis on the people..

Just think about all the unconditional love.