In the last year and a half I have found out more about the brain then I care to know.  I was always good at anatomy.  I was the kid in college that people lined up to check out my notes after class. I was the one who got the A+ or the 110 out of 100, that isn't even possible in college.   Then I had to take anatomy again for some post graduate classes as well as Medical terminology.  After working among medical records and doctors orders as well as PT and OT orders for a few years in a rehab center of a nursing home, medical terminology became a second language to me.  I also became used to the looks that came with some terms and diagnoses. I was able to hone some skills and understanding of what was going on with certain patients around me.  I am not just tooting my own horn, I simply wanted to load my credentials in order to yet again show the following cartoon. 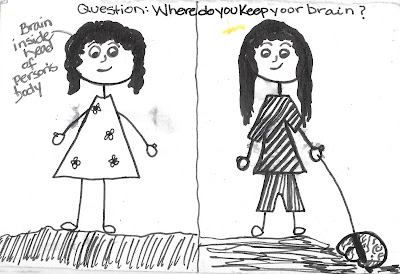 Cartoon by Kirsten Walsh 2014.  All rights reserved.  No coping without permission from Kirsten.

This is a very beat up cartoon and it is time for a clean and updated one to emerge. I did however want to share it again.  It, in my opinion, can't be shared enough.  Whenever I have approached my metal illness or my children's metal illness as of late, it appears that most of the professionals, ironically consider certain of the mental illnesses that stem from the brain, are stemming from a brain found outside of the body.

Once when i was trying to figure out about these horrible headaches i was having, I went to a Neurologist.  He ordered a Cat-scan  of my head and sure enough, there it was, my brain. lodged right there in my skull cavity. From that moment on, I became a true believer of the the brain being part of ones body. It should be treated as such.

That said, like the ocean itself, the brain has barely been touched when it comes to scientific research.  This includes all fields that are not excluded to mental illness.  There is mental wellness of the brain, anti-socialism, how we learn in different environments under different nutritional allotments, PTSD, Alzheimer's, and the like.  Much research has been started but much has not been ended, completed due to our vast expanse of our brain.

Analysis involves both a set of observations about the composition or workings of your subject and a critical approach that keeps you from noticing just anything—from excessive listing or summarizing—and instead leads you to construct an interpretation, using textual evidence to support your ideas. More help with essays here uk.essay-writing-place.com.