I think it has taken me so long to get to my next group of wonderful animals, because believe it or not they are incredibly hard to photograph, at least for me.  They are constantly moving. Group shots are really hard to photograph and get all of them clear and looking at the camera.  I love my chickens.  They won't even lay eggs for 4 or 5 more months.  So I have 3 chickens.  All were born on the same day but of course being different types of chickens they are all different sizes and have very different personalities. 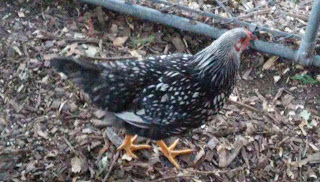 Mama Cosmo  (Mama)  She was the leader for most of the time when she lived in the house.  Since the chickens have been in the yard, leadership has changed a bit.  She is a Wyandotte chicken. They will be laying brown eggs.  Her personality now is mostly a timid and scared.  She does not like being held as much as the other 2. 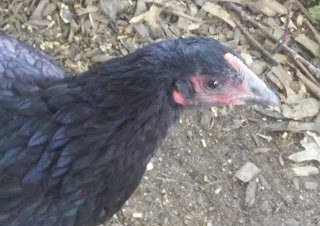 Studio (Sweet Pea or Studio 54) She is a Austrolorp She is the leader now.  She spent all of her time in the house do super ditzy things and was always last to learn a new chicken skill.  She was by far a big airhead. I then started to call her Studio 54 for that reason and Studio stuck. Now in the yard, she is the leader.  The other 2 follow her and keep and eye on what she is doing.  She doesn't mind being held.  She doesn't love it but doesn't fight me or Sam either.  She is also very talkative. And YES I do talk chicken all the time to them.  They do respond to me and come over. 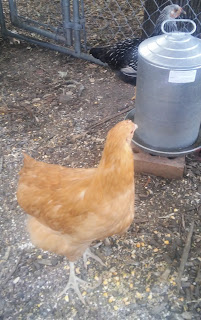 Buff (Buff McNaughten) She is a Buff Opington chicken.  We called Buff, Buff McNaughten after a hemit that lived in the woods by Gull lake.  He knew my father in laws dad and my father in law.  So when we saw that name we knew even though she was a girl she had to have that name.  She has always been the shyest. She has always seemed like the youngest even though they are the same age. 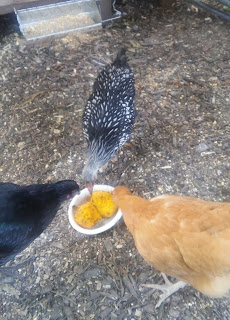 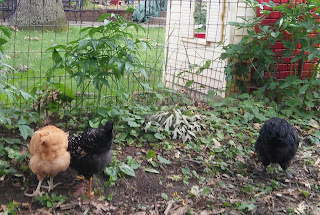 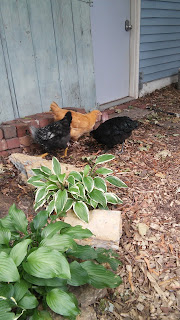 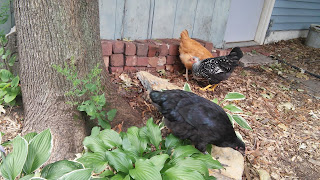 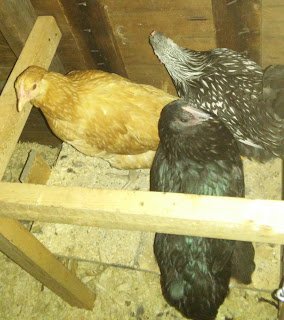 Night time.  Here they are in their Coop.  They make so much noise when they settle down for the night, it's kind of funny to just sit and listen to them.  I know what they are doing.  One chicken gets settled and then another one comes in and steals it, and so on.  This goes on and on.  Then all is quiet.  k~