The day I got "schooled" by my chickens

Of the 3 Chickens, Studio has finally started laying eggs.  She has been for about a month now.  She liked to lay them under the coop.  As we are approaching winter, I have not wanted any of them to get used to laying any eggs under the coop for obvious convenience reasons.  So, I had Rick board around the coop. The next thing I know we are hearing quite a ruckus, noises that I had not heard before.  I ran outside and went to the coop.  There was Studio trying desperately to get under the coop. 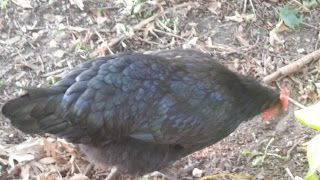 Studio
(It is very hard to take pictures of chickens, I think, they move SO much.)

So I took Studio into the coop and sat down with her.  I put her where she should be laying her eggs.  I said gently "This is where you lay your eggs Studio. This is where  hey go."  So she scratched and scratched and squatted and clucked.  Then she did this over and over again.  Finally after a while she bit my hand and I said "Ok, enough is enough, you go on your way."

The next day I needed to get oyster shells, grit,  and organic seed mix as a suppliant with their pellets. When I was at Eggplant, I saw 2 ceramic eggs (they were quite expensive) in a package.  They recommended them to me to get the hens to lay where they should.  I got home and decided that I could tell the real from the ceramic and put the 2 ceramic in their coop where I wanted them to lay. Just a note, it's not so easy to to tell them apart.

The next morning when I got up and went to feed the chickens, there were 2 eggs laying close together by their chair that sits in a corner of their run far away from their coop,  I went to the coop and inside was laying an egg.

I stood up.  What was I looking at?  3 eggs.  That means one is real.  A chicken really rolled one or both of the ceramic eggs out of the coop, down the ramp and over to the side of the chair.  I took all 3
in and washed them off.  Then I tested them.  The 2 by the chair, one was real and one was ceramic. The one in the coop was ceramic.

Somehow Studio laid an egg outside, and chose to roll out a ceramic egg next to it as if to tell me "NO I LAY MY EGG OUT HERE!"

All I could do is laugh.  Those smart crazy little women.  k~ 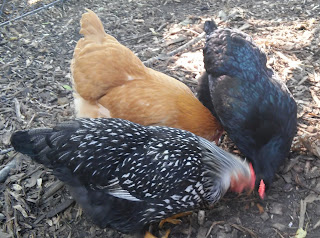 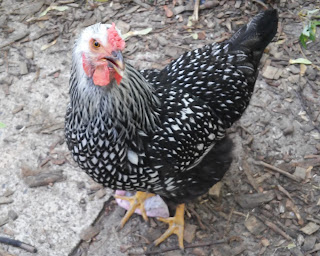 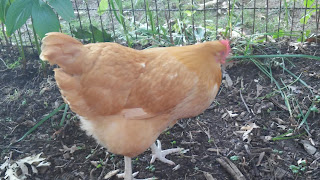